How to get a book deal: My 5-month journey - Alexia Vernon 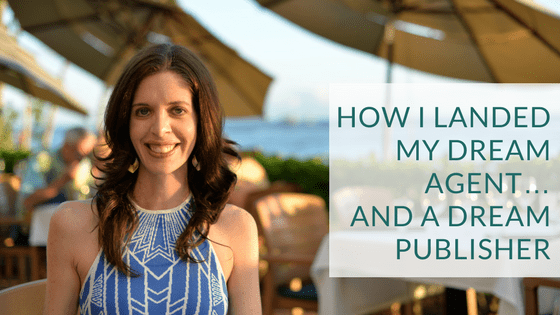 The short version: I got a book deal! My book, Step into Your Moxie, was released by New World Library (a personal growth publisher who has published works by Eckhart Tolle, Deepak Chopra, and SARK) during the fall of 2018.

The longer version: During the Christmas holiday of 2016, I vowed I was going to take 10 days off from my business—a period of time I had not taken off since the birth of my daughter, three years earlier. And during my work break, the vision for this book, the corresponding book proposal to sell the book… wowza, it poured out. I figured if a book was going to wake me in the night, the least I could do was listen and type the words that were flowing from me. (You could say, I was 100 percent focused on how to get a book deal!)

By the time the New Year started, I was three-fourths of the way through a book proposal I was crazy in love with. And by late-winter, I was ready to show my Step into Your Moxie book proposal to a few friends and mentors, and shortly after incorporating their feedback, to agents. But after I was rejected by the agent of one of my business besties (or more specifically, told to triple my email subscriber list and then come back to her), I caught a nasty case of the “I’m not ready’s.” I started weighing my publishing options, and I started thinking smaller and smaller with each possibility I brainstormed.

And at the height of this shrinking, one very early morning the first week of April (while driving to the airport to catch a flight for a college speaking gig), I nearly drove over a bunny who was running across the road. Over the next few days, I saw a lot of bunnies. On chocolates. On trinkets in store windows. In my dreams.

How to get a book deal of your dreams

But when I got home from my speaking gig, I woke up the next morning, haunted by all of the bunnies, put my daughter in front of the TV for an hour (for it was a no childcare day), sat my tush down, and sent out a query letter to the dream agent. In about an hour, I had a phone call from said agent, and by the end of the conversation (which fortunately transpired during a well-timed kiddo nap), an offer for representation. I want this book, he said. I want to represent, you.

If I could have frozen that moment in time, I would still be there right now.

But here’s the thing when it comes to how to get a book deal. (Okay, there are many “things” in this story, but this is definitely one of them.) There is zero chance I would have queried my agent, and as a result, it’s very likely I would not have figured out my own way for how to get a book deal, if it weren’t for the onslaught of bunnies. While bunnies are soft, cute, and cuddly—whether they are in Easter baskets or on the cover of Playboy Magazine—as an archetype they, unfortunately, represent one spectrum of feminine power in my world. And it ain’t good.

When I teach about feminine power and influence, I use the bunny as the image of what we do when we don’t speak up for ourselves. When we police our ideas and censor them before they ever get expressed in the world. When we care more about people pleasing than people activating.

So, when I saw all of the bunnies (and truly, they weren’t just in Easter baskets), I realized they were mirroring back what I was speaking to myself. Every day I neglected to send a query letter to my dream agent, and instead started asking myself, “Who do I think I am to write this book?” (despite the fact this book was poking at me during my waking and sleeping hours to be written), well, that was quintessential bunny behavior.

It took my new agent and me less than a couple of weeks to get my book proposal publisher ready. Had I known that this would happen so quickly, I would have never queried the same month I was about to lead The Spotlight MasterTreat. In other words, yes, I was putting the finishing touches on my book proposal just a few weeks before I hosted my big yearly event. During this time, I was also finishing coaching sessions with my Spotlight Speakers Collective clients and VIP speakers performing short talks at the MasterTreat. And at this very same time, my husband was working out of town Monday through Thursday (and sometimes Friday) each week. I won’t reveal how many days I went without showering during this time. But I’m pretty sure whatever number you guess, it was more than that!

The upside was that while my agent was pitching publishers on my behalf, I was enmeshed in serving five dozen women at my mastermind-meets-retreat. Therefore, I didn’t have a moment to wonder about what was happening behind the scenes with my book. During a post-event group VIP day, I got word that a publisher was interested. And a few days later, while laying semi-comatose in bed after my action-packed five days, I got word that the interested publisher wanted an additional sample chapter.

So, at a point where I was EXHAUSTED, I allowed my passion for this project to fuel me to write an additional sample chapter over the course of a weekend. (While I don’t recommend this kind of deadline for writing book chapters, the literary muses conspired on my behalf, and I wrote what will likely wind up being my favorite chapter of the book in a day-and-a-half.)

While this publisher ultimately passed on the project because of issues with “my voice” (versus because of the size of my list—or lack thereof), because I was now gearing up for the launch of the Spotlight Speakers Collective and a family vacation to Maui, again, my busyness kept me out of worry.

Just before my family and I left home, during a mastermind day with some of my local female entrepreneur buddies, I took a call with another publisher, New World Library to discuss the book. The moment I got on the phone with the editorial director, my gut said… I’ve found my literary home. Our visions for the book totally aligned. Plus, being in a yoga studio, at a spa, overlooking a pool—for a girl who saw a shower at most six times the month before, (there, I told you), this all felt pretty kismet.

And the icing on the already delicious cake— the aforementioned business bestie whose agent gave me the, “See you at 50,000 email subscribers,” well, because she’s like a sister from another mister, she had intro’d me to one of her literary pals who happens to be a New World Library author. And everything my new BFF described about her experience mirrored exactly what I wanted for this next leg of my literary journey.

I knew that publishers, including New World Library, would make their decisions during the last few days of my trip to Maui. And let me tell you, once I was on vacation and didn’t have a million and one items on my to-do list, all I could think about was whether or not I would get my desired book offer.

I asked the universe for a sign—something that would let me know, “this is your publisher,” so that I could get out of my head and enjoy the paradise I was in. And just like the bunny, this next sign couldn’t have been any clearer. While walking to dinner with my family, I spied an evergreen tree in a piece of art. It was etched in wood and looked identical to the tree in the New World Library logo.

Two days later, I woke up to an email from my agent. “Alexia, we got the New World offer. Call me.” After leading a webinar from my Maui lanai (I know, right?!), I called my agent and, pending a few adjustments to the agreement, we had a deal. It was May 24, five months almost to the day since I had started working on my book proposal.

The picture above was taken at my favorite restaurant in Maui, Pacific’o, where my family celebrated over a lot of Ocean Vodka later that night. (And of course, despite drinking more alcohol than I’ve ever consumed in my life, I woke up hangover-free.)

I’ve watched a lot of friends and business colleagues focus on how to get a book deal over the last few years—with varying degrees of success and satisfaction. And although I put out my book 90 Days 90 Ways five years ago, I haven’t been ready to put out a new book until now.

I wrote my first book too early, truthfully.

By the time it came out, (for it was almost two years from the time I signed with my agent until the book was released), I no longer wanted to be talking about onboarding. In fact, a few months into working with my agent at the time, I even shared my idea for the book that will ultimately become Step into Your Moxie. She told me it was not a great idea to change course and pivot into an arena where I didn’t have a deep platform. And she was right. (Of course, it also wasn’t right to write a book I wasn’t passionate about. But I was too much of a “good girl” to own this once I had an agent, and then publisher, on board.)

As I shared in my Spotlight Speakers Salon Facebook group a few days after the New World Library offer, writing a book takes time and, if it’s nonfiction, should pull from the work you are doing in the world. Writing a book in hopes of generating more business (versus having it reflect the work you have successfully, and profitably, been doing)—well, it is a trap for a lot of reasons. At the top of the list:

There are a lot of days where I’m still pinching myself about my unorthodox plan for how to get a book deal, especially how I pulled it off amidst a time of serious scaling in my business.  But here’s what I also know. I didn’t force it to happen on my timeline. I kept my eyes open (and occasionally asked) for signs. And when I got no’s (and let me tell you, I definitely got some publishing no’s) I took a deep breath, a couple of times shed some ugly tears, and moved on.

Whether figuring out how to get a book deal is a part of this season for you, or a future one, my hope is that you will pursue your dreams with grace rather than force.

That you will privilege serving your audience over rushing to check off bucket list dreams.

Toggle the Widgetbar
We use cookies to ensure you receive the very best experience on our site. If you continue to use this site, we assume that you are on board with our terms of service and privacy policy. Find out more.