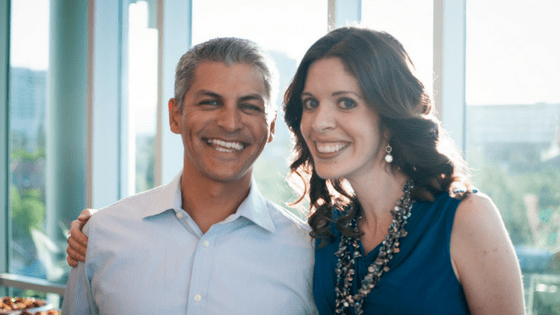 In some capacity, I’ve envisioned making the kind of announcement I’m about to make for the last four years, even if it wasn’t until this summer that I felt certain it was time to make the following decision.

Drumroll please… I’m excited to introduce you to my new COO, my husband, Stephen.

While both Steve and I are a little older (and grayer!) since the picture above was taken 4.5 years ago at the end of a public speaking showcase I led, what nobody knew at the time (but we did) was that we were about 6 weeks pregnant with our daughter. I had just announced, publicly, that I was launching my first high-level, 9-month live program (despite knowing I’d deliver somewhere in the middle of it). And yet, despite not knowing how everything would work out, I knew that I would figure out a way to integrate my work with my family life.

That integration has been imperfect, for sure. But each misstep I’ve made has given birth to something far greater than I could have ever imagined—even if I had to hang in there and breathe through all the difficult, messy sensation and take a momentary step back to sprint forward.

This has been a ginormous week in the Vernon-Oliveira home. Not only is Steve joining me full-time, but our daughter also begins full-time preschool. If you are a parent I know you can appreciate how big the transition to school is, and we had a rocky start to separation earlier this summer at dance camp. As I trade my daughter for my husband at home with me, sheesh, there has been a lot of scare-cited waterworks. For all three of us.

This is likely the biggest transition I’ve ever gone through. And, without apology, I’m allowing myself to feel. Everything.

With respect to the decision to join each other as partners in business as we are in life, this is something Steve and I have been tip-toeing into together for the last 2.5 years. First, Steve started coming in as a photographer for my live events and mastermind weekends. At first, it was a fun way to collaborate. We never saw it as the foundation for anything more.

Then, over the last year, he took on some operational support for The Spotlight MasterTreat. (I have an amazeballs virtual team, but I’ve been less dutiful about building on the ground support.)

And now, in addition to transitioning into a role where he will ultimately head-up all behind-the-scenes operations, he will also be taking the lead with my live events. (So, heads up: I’ll now have the bandwidth to do more LIVE!)

Steve and I have been together 15 years—married for 9 of them come August 18. And yet, while Steve has always been supportive of me having my own business, he did not always see my money-making potential. We assumed he would be primary breadwinner. He used to flinch every time I made a business investment. Probably secretly wished at several points that I would just get a j-o-b. (Although one of the many reasons I adore him is that he never suggested that I should.) And I know he did not for most of our 15 years together think that he would ever join the business that I was building.

While for many of my entrepreneurial friends who bring their partners into their businesses, going “big online” facilitated the financial freedom to join forces, this is actually not our story.

Choosing to scale what I’m doing offline through live events has empowered my greatest business success (and satisfaction).

I love leading live workshops, retreats, corporate trainings and VIP Days. They have allowed me to do the transformational speaking and leadership work that my soul hungers to do, work deeply with a manageable amount of people, and create a thriving business and retire my husband from his 9-5. (Okay, it really was more like a 4am-8pm most days. Working as a wildlife biologist is no joke!)

For many years, despite having a workshop and training background, I had no clue how to make a workshop profitable. As a result, I thought I needed to lead events with hundreds of people in attendance. And this couldn’t be further from the truth.

I’ve made multiple five figures (and more recently over six-figures) from leading a single, intimate live event with under 20 people in the room!

Want to know how to earn big, even if you keep your live events small?

I’ve created a digital guide, 5 Ways to $25K, that shows you different workshops structures and budgets so you can see exactly how to make a transformational workshop profitable. And this works whether you are a coach, a lawyer, a designer or a… personal chef who wants to come cook dairy-free, soy-free, egg-free meals for my family and me. (Yes, I’m working to manifest that!)

I invite you to grab a copy of my 5 Ways to $25K digital guide for leading profitable workshops here.