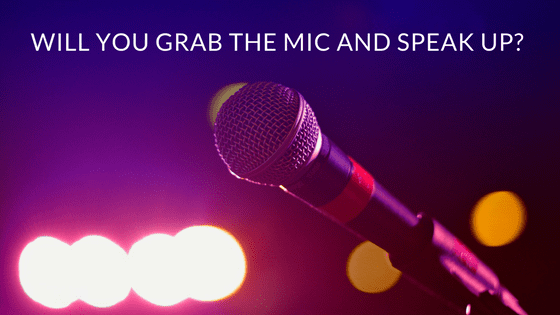 Every time there’s a whistle blowing moment covered by the media, particularly when it revolves around sexual abuse or sexual harassment, I lose my breath a bit.

At four-years old, when I told my family I was being sexually abused by a loved one, the reactions were… mixed. (That’s the polite way of saying that while a few people sought to protect me, many others did not.) That stung. It started a chain reaction of behavior for me, that lasted from childhood into early adulthood, of keeping secrets. By the time I was in my late-twenties, and on the cusp of motherhood, however, I couldn’t stay quiet anymore—about much of anything. Secrecy is exhausting!

Coincidentally (or not) this was also when I hit my stride as a speaker, when I stopped hiding behind my “expertise,” and started telling my important stories and calling my audience members to bust bigger, bolder moves in their own lives.

I started to speak up as a citizen about my beliefs—from rallying for universal healthcare to more recently calling for legislation to ban assault weapons and bump stocks.

Several years ago, when I was on an airplane and saw a grown-up inappropriately touching a child, I alerted flight attendants and ensured police intervened as soon as my plane landed.

And, by far, the most terrifying act of truth telling has been speaking up when I witnessed my perpetrator preying on others.

So, as I hear celebrities (and us regular folks) weighing in on who did and did not know about Harvey Weinstein’s alleged three decades of sexual misconduct, I think it’s important to remember the consequences for speaking up.

When we talk about our social, political or economic beliefs, or call others out for egregious acts, we may lose clients, friends and even family members. Others may seek to silence us, we may lose out on opportunities, and we may question whether being in our integrity is as important as our security and popularity.

When I made the very uncomfortable decision to speak to flight attendants on that flight, I wound up enmeshed (anonymously, but enmeshed nonetheless) in a very contentious child custody battle.

And each time I’ve spoken up about abuse in my family, I’ve been met (especially as I’ve gotten older) with threats and vitriol I wouldn’t wish on anyone.

Therefore, I understand why so many people pretend they don’t know (or prevent themselves from truly knowing) when ugly acts are being committed.

I also understand why, as someone with power and privilege, I have a responsibility to speak up—on stage and above all in life!—even when it’s messy, painful, at times debilitating.

Because if I don’t speak up, who will?

If you’re anything like me, you’re seeing a lot these days that hurts your heart. And whether you’re triggered by the same things as me, or quite possibly triggered but in an alternative direction, my hope is that you will use your power and your privilege, your breath and the blood flowing through your veins, to speak up. To speak out. To step into your moxie, your way, rather than kowtow to political correctness. And to keep your ears, as well as your heart, open.

“Where you see wrong or inequality or injustice, speak out, because this is your country. This is your democracy. Make it. Protect it. Pass it on.” (Justice Thurgood Marshall)