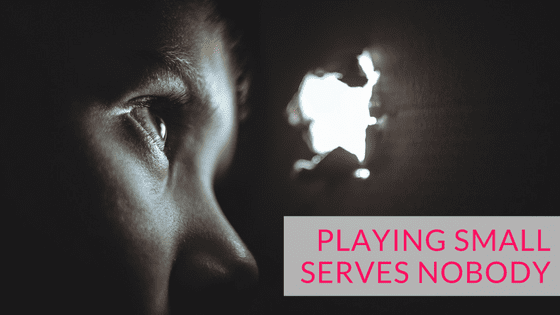 Over the last few months, multiple friends from my pre-business life have re-emerged.

And in each case, the person has said something along the lines of—

Lex, it’s so great to see you claim your voice and step into the spotlight.

Hearing such words is incredibly validating. For while I’m one of the lucky ones (I had parents and teachers that consistently sang my praises), the truth is I never learned how to be visible AND believe I was deserving of being in the spotlight until I stopped working for other people.

As an actor, I constantly compared myself to other performers (and I was surrounded by some really brilliant ones).

As an educator, I kvetched about opportunities my peers were receiving, rather than getting curious about what I could do to create and attract my own.

And even in progressive, seemingly egalitarian spaces, I saw a lot of men taking the mic and really bright women censoring themselves and playing small.

I graduated from an all-girls’ middle and high school, majored in women’s studies in college, and was even adjunct teaching women’s studies amidst a lot of this. But for too long I didn’t know what to do about it.

And then, because when my father felt trapped early in his life he started a business, I decided to do the same.

January 2017 marks 10 years since I declared myself a coach.

It would be horribly disingenuous to suggest that the moment I hung out my shingle in 2007 all of the self-doubt and hiding abated. Because truthfully, in the first couple of years of my business, the mental jujitsu got worse before it got better.

But since I pivoted and decided to get back on stage as a speaker and shepherd other bright voices onto their own stages, I’ve grown into unshakable confidence and truly believe I am deserving of the spotlight. Because I am!

And so are you!

I’m crazy passionate (some might say fanatical) about empowering both emerging and more experienced leaders to use speaking not only to spread their ideas, grow their tribes, create impact and connect with their clients, but also as a way to shed their self-doubt and settle into feeling truly worthy of being seen.

That’s why, in my Step into the Spotlight 10-Day Speaker Challenge (kicking off right after the New Year on January 4th), I’ve put together a one-of-a-kind mix of virtual LIVE and DIY training on cultivating the inner game and outer game necessary for sustainable speaking success.

Whether you’ve never gotten on stage, have dabbled with some speaking gigs or are speaking quite a bit, if you know something’s funky (you aren’t translating audience members into clients, you feel like you are hustling for opportunities rather than attracting them, or prior to speaking you put yourself through excruciating levels of psychic torture you wouldn’t wish on your worst enemy), seriously, this training is going to…

Come on over and see for yourself.

And in the meantime, I’d love to know, what does being seen look like for you in 2017?

Sending you so much love as you closeout 2016 and transition into 2017. Whether you join me for the Challenge or not, let’s do great things in the world during the year ahead!