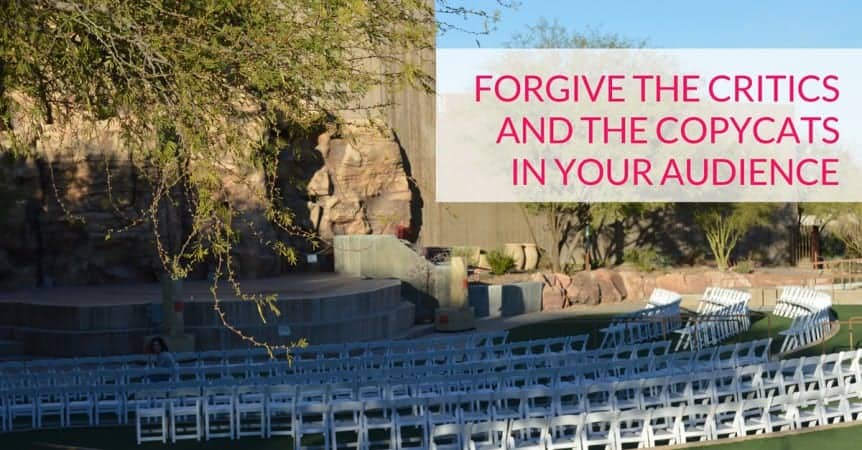 My insides feel as soft and fluffy as marshmallows. I wake up and my first thought is, “thank you,” rather than, “What do I need to attend to first?” I laugh and cuddle with my family during non-work hours without any sense I should quickly check my email.

In full transparency, during each of my previous launches the week after I’ve closed my cart I’ve felt depleted. Anxiety-ridden over what I had to “do” next – since I had poured so much time and energy into my launch I’d neglected all of the other pieces of my business that now needed attention.

This time is different. I not only surpassed my sales goals, ploughed through the stomach flu and a break for a few days in childcare, I ate better than I ever have, amped up my exercise and self-care, kept up with my business backend and kept the focus on where it needed to be.

I have never had so much fun sharing resources and answering questions in my Spotlight Speakers Salon Facebook community. Nor has creating and facilitating webinars and master classes ever felt so joyful. Never before have so many amazing complementary speaking and business opportunities shown up during a launch – nor have I ever been so full of confidence that a launch will be successful.

“The perfect launch has been selected. It’s on its way. And I’m ready to receive it.”

This was my mantra – in meditation, any time I was in my email inbox (though I stayed out of it MUCH more than during previous launches), and when my self-talk was anything less than 100 percent self-loving.

Each time one of you reached out (and you reached out a lot!) to share how you were applying my insights to prioritize your speaking, thought leadership and overall wellbeing (for speaking is never just about growing your business, it’s fundamentally about coming home to your own wisdom and voice), my heart felt happy.

And yet, for the most part, that happiness hasn’t felt ego-driven.

When I take responsibility for my own inner voice, I show my tribe how to do the same.

Being on purpose isn’t about the “likes” – it’s about my responsibility to catalyze millions of heart-centered, high impact speakers and leaders.

I honor where I am on my path, and then make sure I don’t derail myself from staying on it.

But for every dozen “Lex fans” that exist, there is at least one person who is not so warm and fuzzy for me.

Over the holidays, shortly before re-releasing Your Spotlight Talk, I received one of the most sharp, accusatory and hurtful emails I’ve ever received. It came from a thought leader who I respect deeply and straight up attacked me as a person.

While my head declares I would rather speak my truth than be liked, my heart says that when people attack my character, my ideas or what I stand for, it’s still going to sting. Sometimes, when I’m really doing the inner work, it feels no stronger than a nip from a bee. But other times, if I’m a bit lax in my self-care, not practicing yoga or meditating regularly, it can really send me into a lack of worthiness spiral. Like it did for a few days at the end of 2015.

What gnaws at me even more than having someone dislike me, however, is when people reapppropriate my ideas or words as their own. And this too has happened lately.

The first time that I launched Your Spotlight Talk, somebody who I liked and considered myself a bit of a mentor to, was so inspired by my vision for a Coming Soon page, she went to my designer and had her create the exact same template for her. And…used the exact same narrative structure I used – simply substituting her program facts and biographical details for mine. Fortunately, we resolved the situation but the relationship, understandably, was never the same on either end.

A little over a year later, a similar situation has unfolded. This time from somebody in my own industry. The exact name of one of my events and gobs of messaging from my free trainings, virtual events and sales emails have been used for this person’s marketing. I’m not sure how I will handle this assault.

Stealing other people’s creative work is a violent act.

I’ve only been robbed once. It stunk. I was in a Brookstone getting a massage in one of their chairs and placed my purse on the ground by my feet. When I realized what had happened post-massage, after I got over the immediate panic of being without identification, keys and various other personal accouterment, I realized that although I could have been less reckless with where I left my purse, the thief was really committing a crime against him or herself. I prayed the person would soon heal the wound that was prompting his/her behavior. (Incidentally, as soon as I spoke my prayer, a janitor at a nearby motel found my purse and all of its contents, sans my $300, and returned it to me.)

Forgiveness liberates our happiness and recasts us into the role of protagonist in the stories we carry around.

Unlike my belongings, my voice has been stolen several times in my life. From the person who sexually abused me (and later threatened me for speaking out), to the guy I had a crush on in college who called me “horse face” behind my back, to a leader early in my career who constantly told me to do things her way (versus my own), to in more recent years fellow business owners who’ve in small and large ways siphoned my creative work and passed it off as their own, each time I’ve come back more steadfast than ever that

Someone can steal my voice, but I can and will always reclaim it.

While assaults on our voice feel personal, the truth is they are almost always about the other person. We have triggered them, most often unconsciously, and their fear, their self-doubt, their stuff might be projected onto us…but it’s really not about us.

What is 100 percent ours is our response. How we use our head, our heart and our soul to speak about the situation, narrate it for ourselves and ensure our behavior is in full alignment with who we want to be.

One of my go to Lex-isms that I use in meditation and in my teaching is:

I am not my OBSTACLE.

I am my OPPORTUNITY.

In every moment there are both.

The difference is how I SEE.

Through an almost daily meditation practice, I’ve amped up my capacity for trusting myself as a communicator across contexts, turned up the volume on my intuition and loving self talk and found answers to even the most seemingly unfixable problems.

In order to hear my real voice, I strive to silence my fearful voice.

If you’d like to grab one of my favorite speaking meditations I’ve recorded, When I Am at Peace, I Am in My Power, click here to sign-up for it.

Finally, on February 18th, I’ll be doing another one of my FREE master classes – this time on how to create multiple streams of speaking revenue. If you are not already a member of my tribe, sign-up for my newsletter list below so that you can receive details on this and future FREE trainings.