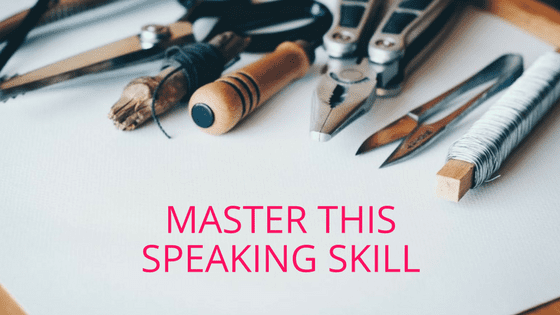 In part one of this four-part speaking success truth bomb series, I’m dishing on the number one skill that accelerates speaking success—speaking to the conversation in your audience members’ heads.

Now, I want to acknowledge one of my mentors, Jonathan Fields, for this concept of the “conversation in the head.” During one of his trainings, Jonathan spoke about how this is the heart of writing great copy, and I realized it’s also at the heart of creating wicked transformation as a speaker for your peeps.

Your audiences want nothing more than for you to make your ideas, personal stories, and recommendations relevant to them.

If you’ve been speaking for any length of time, you know this. However, if you’re like most of the speakers I’ve worked with, irrespective of how long they’ve been speaking, you strive to create relevance with your content, which is a good start, yet you don’t go a step further and connect deeply with your audiences through the connective tissue that runs between all of your main points, sub points, examples, and so forth.

Speaking to the conversation in your audience members’ heads can mean that you:

(i.e., Now, I can hear the alarm sounding in your head. Lex, I’m a special flower; what you’re saying sounds great, but it would never work for me. Imma be terrified of public speaking the rest of my life!)

(Last week I gave you one of my favorite ways to do this.)

(i.e., Now, I can hear the alarm sounding in your head. Lex, I’m a special flower; what you’re saying sounds great, but it would never work for me. Imma be terrified of public speaking the rest of my life! I get it. That voice sounds like it’s you. But what if, stay with me, you considered the possibility that that voice isn’t the real you? And instead, it’s resistance. And that the real you is crying out—even if you can’t hear it underneath all the crazy loud noise—and it’s saying, Lex, I was put on this earth to do big things. To say big things. Please, sista, show me the way.)

Speaking to the conversation in your audiences’ heads lets you demonstrate your credibility, engender trust, facilitate deep connection, counter objections, and move people to take big action—in the world (and with you!).

And the most impactful speakers, they speak this directly with their audience members throughout a presentation.

Is it scary to be that real and raw? You betcha—and it’s also insanely satisfying and fun.

So, the next time you want to move an audience member, a current or prospective client (or even a romantic partner (or child!) to take action), think about what is going on in his, her, or their heads, and speak it aloud.

Let me know how it goes in the comments below.

And be sure to subscribe below so you don’t miss parts two through four of my speaking success truth bomb series, dropping every few days over the next couple of weeks.